Lots of people in England
Liked Christmas a lot... 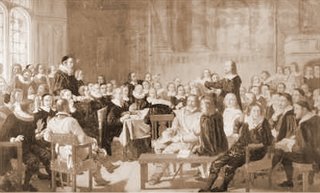 The hosts had to guess the mummersÆ identities before

God bless the master of this house Likewise the mistress too, May your barns be filled with wheat and corn And your hearts be always true. A merry Christmas is our wish Where'er we do appear; To you a well-filled purse, a well-filled dish And a happy, bright New Year.

have indeed flourished throughout the centuries...

As have mind-numbingly flagrant cultural Frivolities never imagined, such as the

Oh what a time we had over there

a time of laughter and good cheer

and now the Dollmaker's fervent prayer...

is for even more Silliness in the coming year...

The Dollmaker could not resist having a Tiny Dollmaker made...

ōYou have brains in your head.

You have feet in your shoes.

You can steer yourself in any direction you choose.

You're on your own. And you know what you know.

And YOU are the one who'll decide where to go...ö

Boy with crow mask at the Armadillo Christmas Bazaar

After surgery and a stroke, and a long recuperative period,

we are all glad to see Awesome Woman Kate Moonstone

I don't know exactly what a prayer is...

I do know how to pay attention, how to fall down

into the grass, how to kneel down in the grass

how to be idle and blessed,

how to stroll through the fields

which is what I've been doing all day.

Tell me, what else should I have done?

Doesn't everything die at last, and too soon?

Tell me what it is you plan to do

with your one wild and precious life?

This Angel is dedicated to everyone who is having a rough time during the Holidays.

May you find Peace in the Quiet of Winter...