What we have Longed to Experience

Ok, so this new Goodwill Store had it's Grand Opening

on a freezing cold, rainy winter day in Bastrop, Texas.

In spite of the really unbelieveably bad weather,

there was quite a large crowd milling about in the store,

the Dollmaker among them... and she had her eye on the Book Section.

The Dollmaker saw her chance- a crevice in the sea of people- she slipped in closer,

eek! only to find herself targeted by a small but mighty paperback,

having dislodged itself somehow (couldn't have been the jostling of the crowd...)

from a stack on an upper shelf, it was knocking off several much larger books

in the process of hurling itself through the air right toward the Dollmaker.

There was some kind of woo-woo at work here...

She checked out the title:

Of Course it was:

Life on the Other Side

It was $2.00. The Dollmaker, with a pained expression,

after all,  you can go to the Ladies of Charity Thrift Store

and get paperbacks for a quarter.

She was about to put the book back,

when the Saleslady (a skinny little black lady

turned to the Dollmaker and in a high-pitched voice said,

She looked at the Dollmaker concernedly,

and assured her that within this book

there would be information that would be worth way more than $2.00 to her.

The Dollmaker bought the book.

After all, the Dollmaker figured, it does take some guts to presume to teach

the average still-alive citizen about 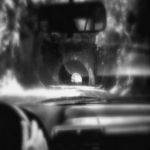 Let's face it, some people don't even believe there IS another Side,

so we can start there with the problems this author must have encountered ...

Fortunately, the Dollmaker did lean toward

the Concept of There Being Another Side,

So she proceeded to read on.

The Dollmaker found that, in her book about The Other Side,

such as the existence of Towers, gardens, pets, books, an incredible all-pervading

feeling of Love, lots of things to do and ideal weather conditions....

On the Other Side.

However, there is one thing that We have on This Side

that The Other Side doesn't have!

"There is no precipitation on The Other Side, no rain, snow, sleet or hail.

There is no wind stronger than an occasional gentle breeze,

no heat waves, and no cold fronts."

about the Sylvia Browne Book...

The Dollmaker had indeed been provoked, incited even- to thought!

Could it be that we long to experience the Wild Earth?

we Humans just love to come to Earth!

We Love this place!

The best and most beautiful things in the World

cannot be seen or even touched.

They must be felt with the heart.