when supernatural forces and natural superforces were commonplace...

There existed a Legendary River

whose banks sparkled, dear readers, with flecks of purest

Ah yes, for us, a pleasant Fairy Tale, but for the people living

along the Pactolus River in Western Turkey, the Gold in the River was quite real.

And for many generations

this Story was- and still is- told...

Once upon a long time ago,

there was a deeply disturbed King, who, in the beginning of the story,

was still not yet Completely Insane.

This King already had a LOT more Gold than any other King around!

Still, he felt empty... impoverished even, as he would lie alone at night,

in his cellar, neck-deep in his stash of gold coins.

For providing insight into the Ageless Timeless Classical Greed of Antiquity,

but he deserves the respect due a Master Gardener, and

he also gets credit for being the proud Father of a Splendid Daughter.

The King and his Beloved Daughter, MaryGold,

spent quality time together strolling through the Castle Gardens,

chatting, laughing, quizzing each other on rose varieties

and tossing gold coins into fountains.

Yes, he did name his daughter Mary-Gold. Some spell it Marigold.... 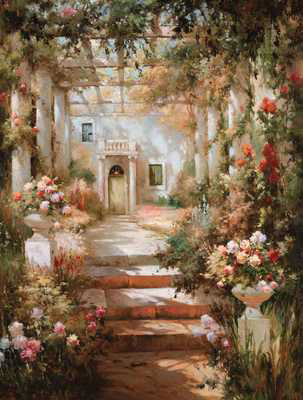 One balmy Mesopotamian evening, a commotion arose from within the Gardens.

Castle Guards dragged before the King a naked and besotted Satyr

whom they had discovered sprawled horizontally upon a bed of petunias.

No stranger to the Nectar of the Grape (or the petunias) himself,

as Silenus, the favorite Satyr of the Party-God

So, instead of punishing the favored Satyr

the Party-God Dionysus himself, and his wine-drenched entourage arrived.

Immensely pleased at the treatment of his Satyr, and raising the Rites of Intoxication

to a new level as only He could do, the Party-God Dionysus declared publicly

that he would, at that very moment, bestow upon the mortal King- the gift of

It is said that at the perfect moment, the Nut pops right out...

that everything he touched would turn to

Dionysus replied:  "Excuse me? Please tell me you are kidding."

But King Midas was firm. He assured the skeptical God that He heard right.

So, with a wink for his troupe of giggling nymphs, Dionysus conferred upon King Midas

Capering about like a lambkin, giddy with greed-tinged glee,

He became like a man possessed! He whirled, he twirled,

he bent down on one knee and touched the stone floor.

He ran outside and before anyone could stop him, he touched his Roses!

He could hardly believe himself, he really thought he was a genius...

Starvation could be Imminent.

Just then, his beloved Daughter, MaryGold, ran into the room

holding a Rose from the Garden.

She was NOT pleased.

"Father! A Blight is upon the land!" she cried.

A solid gold apple rolled off the table.

Peering out from behind a mountain of gleaming golden food

King Midas ventured : "But honey, the Roses are more valuable this way!"

The child, MaryGold, was too young to understand "abstract values" or "Insane"

So she ran to her father to take his hand to show him the worthlessness of Gold Roses...

And he, in blind hopeless denial which some would call dangerous and others would call stupid,

reached his own hand out to her.

And when their fingers touched, King Midas's beloved Daughter turned to Gold.

So there it was. Checkmate. The Idiot King defeated as Greed

eclipsed all things precious and priceless, alive and beautiful.

King Midas suddenly hated Gold. But he hated himself even more.

Curse of the Golden Touch and

give him back the riches he possessed all along but never valued.

Dionysus, a Father of an indeterminate number of offspring, himself, took pity on

the devastated King and commanded him to: "Go bathe in the River!"

the power flowed into the River Pactolus and it's sands turned to gold.

was restored to the way it was before.

Which is truly lovely

but not the end of the story...

It was said that Midas renounced the throne, joined up with Dionysus and his

merry band of pranksters, and ended up getting in trouble with yet another God...

The God Apollo, who, in response to an affront,

was the second God to bestow upon Midas an amusing Gift...

But the Dollmaker digresses...

The character the Dollmaker liked most in the story was

Sweet, and innocent,  yet not afraid to speak up

MaryGold or Marigold represents the True Treasure in the Story.

As the Subject for a series of Dolls, the sharp young princess Marigold

her father, King Midas, about the Blight of Gold and it's wake of destruction...

just before he turns her to gold.

Made in the Style of the RoundHeads.

Yes, in step with the Latest Mass Fantasy