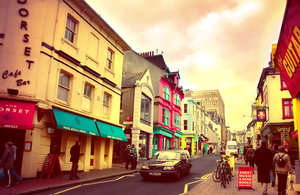 In the Dark Ages, Before there was

Paintings were just a little... off.

Planes and Angles collided, Distance was perplexing and

Size was commensurate with Ego...

(who is the most Important Person in this picture?)

(HINT: The one who is almost as big as the Cathedral!)

(possibly because derisive laughter is so debilitating...)

for them the problem was-

How to represent Someone Important

without making him the size of a house.

It has been boldly proposed that

in essence, The Renaissance was about (a new)

and this is why DaVinci's  iconic mural

has been proclaimed to be the definitive Painting of the Renaissance.

Here, the lines of the ceiling and walls direct the eye to a single point.

The head of the Most Important Person

is unquestionably at the focal point of the painting

without having to use the prop of Exaggerating his Size!

May Balance, Symmetry and Proportion prevail!

The Mural is located in the refectory, appropriately,

(a refectory is a dining hall, btw)

of the Convent of Santa Maria delle Grazie in Milan, Italy

In fact, the lines of the room itself

seem to travel into the vanishing point of the painting!

Not only has it been studied, scrutinized and assigned legendary status worldwide

for it's mystical connection to the Holy Grail, but it's also

one of the Most Parodied Paintings in History!

Dallas artist Glen Tarnowski substituted Bugs Bunny for Jesus and other cartoon characters for disciples in his parody of "The Last Supper,"
which he called "The Gathering." (Chuck Jones Gallery)

And even the Texas Renaissance Festival had it's

a Free Online Photo Editor
glitter-graphics.com
and    blingee.com
and