oh yes.    The world was just full of unprecedented irregularities
during Month Number Two of the

Hey Grandpa, tell us the story about the Time of the Strange Masks!

Again?  Oh... it was crazy how the whole world suddenly needed more toilet paper than could be supplied...

NO Grandpa, we want to hear about the Strange Masks everyone was wearing back then....

The Tale of a Dollmaker's Disposition on

and how she succumbed once again, to Diversion...

Well, if March was scathingly "irregular"...

April left March in the Dust...

and the Dollmaker, swept along in the flotsam-enriched tsunami of

ended up being righteously goaded into becoming

It certainly could be called:

a Dollmaker's Impulse to Respond Artistically to a

from the start, the Dollmaker KNEW that there was

she was going to get involved in all that "Anonymous Face" Mask-making!!


Really this was no time to affect a Haughty Attitude on Couture...

what she called "generic face-diapers" were simply Not Her Style at all!

Nor did the "50 Shades of Bondage" aesthetic appeal to her for going to the store...

...in spite of the obvious attraction that

a simple change of Accessories nails

All Four of these Looks!

"The Hostage", "The Assassin", "The Train Robber", AND "Voldemort"

accustomed to investing  personality into the faces of her dolls,

than she would throw a milk bottle...

although if given the choice.... hmmm

the milk bottle is funnier.

What? Are you Kidding?

Even the most Primitive Societies remembered to include

(at this point her Haughtiness was full blown...)

Now the Dollmaker could understand- what with the sheer volume of

for the general population and for sure, she gets that "anything is better than nothing"

(hey in Houston they were using Bananas- Really- you can't make this stuff up!)

but, for herself, the Dollmaker "just couldn't go there"...

whoever posted this picture on Facebook changed the Dollmaker's whole attitude.

Compared to the prevailing taste in Facial Snowpants

why, these were positively GLAM!

Someone was at least Parodying the Horror!

Now this was  a Challenge  she could consider...

an Authentic Artistic Response to

an Extraordinary Time in History!  A reason to make:

and it seemed there were others, who, preferring that "human look", shared her aesthetic...

So, in the name of Fun, Stubborn Rebellion, Staying Home and Staying Sane

she veered away once again- from Dollmaking...

and love for Humanity prompted Diversions into

not totally unfamiliar territory there...

especially Pandemic Mask Making- should logically start with the FIT.

The Dollmaker carefully copied and sewed

the Standard Pattern widely distributed on the Internet

and it fell right off the back of her head. oh dear.

It can't fall off in the middle of a Pandemic!

...made from "whatever was available around the house"...

into the bridge of the nose with her "standard black thread"

(she always used black and didn't actually have any other thread colors!)

And the Pipe Cleaners proved to be too flimsy.

the early masks were a comfortable fit and

during which the Dollmaker-turning-Maskmaker found nice New Fabrics

in flesh-tone and white with matching Threads!

The next big Consideration for Pandemic Masks was

and the Blue predominated over the White Shop Towels

during the Dollmaker's Rigid Testing methods

(washing dishes for 3 weeks with Blue vs. White)

so, the Blue Shop Towels were the Chosen Ones

but the Dollmaker, improving her technique with every mask,

eventually felt that the Blue on top was too "abrasive"

so she eliminated the White Shop Towels altogether

and added another layer of soft fabric over the Blue...

...one of hundreds of small changes made

resulting in "Test Masks" all over the walls...

So the Art Mask Challenge

was taken up by the Dollmaker and

swiftly became "not really part of the Wee Peeple business, but, well, alright."

and: How to Purchase an Art Mask through Paypal

The fact of there now being "customers" necessitated

These are NOT intended to be Medical Grade Masks!

How to Measure one's Head for an Art Mask.

How one must Regard the Art Mask as a Wearable Painting

and refrain from tossing it into the washing machine with the laundry...

Here's the Link to ALL the Answers:

So, just when the Dollmaker had snuggled down into the idea

that she was going to spend her Spring mornings

listening to the birds, breathing in the heavy scent of Jasmine, counting the snails...

and her leisurely afternoons drinking wine amongst the baby pumpkin plants..

It turned out that she's been Crazy-Busy

filling orders and Experimenting with better designs for the

And it would have seemed like in the year of the

that Dollmaking would have been "The THING"

For now, anyway, the Dollmaker is somewhat caught up in:

The Time of the Strange Masks 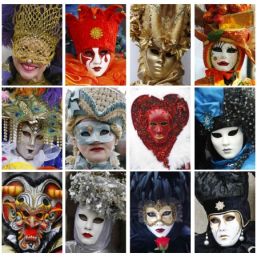