Geometry: The branch of Mathematics which addresses questions of

shape, size, and position in space.

And... Okay, this is Legit folks, LOL, believe it or not, there actually exists

Indeed! Actually, the Dollmaker found more than one Version!

So now she feels compelled to attempt to Explain

the Saga of our Geometrical Origins.... 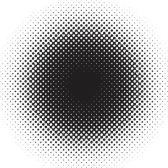 ...way back anywhere/always in the Meaningless Timeless Endlessness...

...there was just Space.

the first "Thing" erupted into manifestation...

Well, that did it. The rest is history.

Because that seemingly insignificantly infinitesimal

Vibrated the sensitive Matrix of Space in every direction at once...

and when something gets started in SPACE, well,

it's practically impossible to stop it...

Rings expanded from the center outwards...

And the very first geometrical shape was born: 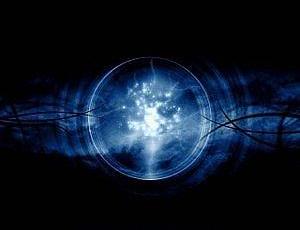 found this momentous event to be unprecedented...

the same Space as before, but with a Boundary!

...which would make it

And So, with grand flourish, GEOMETRY embraced the BIG PICTURE!

Euclid, a Greek Mathematician...aka: The Father of Geometry...

drawing a circle with a compass

Geometry heralds the Spiraling Outward or whatever it takes to beget

Ah, the far-reaching Implications of a Second Circle!

This may just look like two intersecting circles to the untrained eye....a Major Symbol in Esoteric Geometry!

"The Womb of the Universe!" (small symbol, big concept)

form the Gateway through which Creation Legends may appear.

Scholars call that oval-like shape in the center: the Vesica Piscis

(the name literally means "the bladder of a fish" in Latin... but anyway...)

From the Microcosm (cell division) to the Macrocosm (Crop Circles)

Not to mention the shape of the Magnetic Field around the Earth!

The Vesica Piscis is a Symbol found in Art

as well as Nature.

Okay, now that was ONLY Two Circles, folks.

It gets much more interesting... just imagine the practical uses for

(Geometry- you gotta love it!)  Keep drawing circles around the central circle

Boink! Another Sacred Diagram. This one known as the...

And if you got real diligent (like the guy in this video) and went round and round,

finding every intersecting point and drawing a circle there...

the diagram would soon become

Inside the Temple of Osiris... down within the deepest and oldest chamber

etched into a stone block

this ancient image was etched, they say, like a laser etching.

The Flower of Life!

the Flower of Life design seemed important to them too!

Beautifully inscribed on a Ball which represents "the World" and

Guarded (or possessed by) this seriously No-nonsense Imperial Guardian Lion.

( Ming Dynasty stone lion in front of the Gate of Supreme Harmony in the Forbidden City, Bejing, China)

Where there is Seed and Flower, there must be Fruit!

Subtract six and get 13 Circles

And, this Folks, is the Sacred Trump Card of Geometry!

It's even named after an Angel:

which contains within it, all five Platonic Solids.

hmmm... consider the Concept of "Perfection"...

Revered as:  Fundamental Components of the Physical Universe!

Plato and his contemporaries went nuts!

is only surpassed by their functionality!

Oh no- wait! ...Mathematicians are nowhere near done yet.

along the spiderweb parameters

of the Physical Universe,

spiraling in and out of Black Wholes,

Is there a Geometric Model, then,

for the Shape of the Infinite Universe?

Of Course there is!

For Scientists and Mathematicians, the Final Frontier is Infinity!

They have been "rounding off" the equations long enough.

No need, anymore... not with this handy new model for Infinity!

It's the same donut model that worked for Black Holes...

"The more things change, the more they remain the same."

The Pinnacle of Geometrical Creation Theory!

This model, Friends, explains Everything. Need the Dollmaker say more?

A Model for Infinity, which includes an "Outward" phase

The Life Cycle Itself!

Want to know more? check out this link: