all those convivial Time Travelers

who strode -or stumbled- across the Threshold of the

Might you have a Fabulous, Exotic, totally Irrelevant Costume

that you can't wear anywhere? 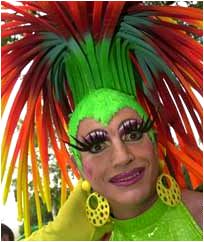 Ha!  Darlin, Whatever it is,

it will always be perfect for

(and any other weekend) at TRF

on the grounds of the Texas Renaissance Festival..

there's a LOT of Strange going on!

yes, and just think- the Doll Shoppe only gets a tiny fraction

of what is really out there, folks...

So. Winning the Strange Award this year, Hands Down...

having a bonafide "Hands-On" Experience

The whole Doll Shoppe gave him a Hand!

It was a free-for-All Hallows Eve Weekend:

Yes! so It was finally

the Dollmaker thought she would put out some of those...

How about that! They were a big hit!

There WAS a lot of Strange going on

but it was balanced by Advancing Legions of

And then on and On Beyond Halloween...

happened to be standing right next to one grinning half-drunk scurvy seadog...

a villainous sort for whom she had no love...

who proceeded to accompany her right on out of the doll shoppe and into their future together...

(..that's going to get interesting... mused the Dollmaker...)

even as other Dolls bravely stood through Four MORE

that is...uncivilized but not entirely incomprehensible..

inviting each of us to explore our own repressed

so, once again, the

offered Sanctuary from the trampling mobs

and Hope for the possible restoration of Sanity to those who had unwittingly Lost it.

was only open as a Point of Sale and Sanctuary

The Dollmaker personally meets the public

for only 8 weekends out of the entire year..

but TRF is an amazing show....

"Something unknown is doing we don't know what."

“I know some good games we could play,” said the cat.

“I know some good tricks,” said the Cat in the Hat. “My tricks are not bad,” said the Cat in the Hat.

With so many more Villains about than usual...

( almost as if someone had invited them all there! lol )

Again patrons found a good "Hideout" at the

Remember that little kid -Wally- who made

Knocking on the Fairy Door

The Return of Wally!

He first knocked when he was only five...

when Garden Fairies danced and sang:

Since then, many others have knocked!

referring to what mostly was not worn under the Kilts..

and further inquiry into

what it must be like to sit on those concrete benches...

actually totally stole the show.. along with their Tiny Wiz Companions

(remember, these are actually Clothespin Dolls!!!)

and the 3-day Grand Finale:

After the faire, these ladies go home to different states!

Each girlfriend is going to take care of her friend's doll while they are apart.

And the dolls will reunite when the ladies see each other again!

What a cool thing to be friends like this.

The Dollmaker gives thanks...

she chose her first Fairy Doll

and she has graced the Doll Shoppe with her Fairy Presence

Strange as it may be, (darlin, 'strange' doesn't even begin to describe it)...

it's a pretty good life... and

Long Live all the good sports and cheerful Gentlefolk

whose Paths led them through the

goes out to John, Sherry and Lisa

You’re off to Great Places!
Today is your day!
Your mountain is waiting
So… get on your way!