Inexplicably, the Goddess of Love, Beauty, Sorcery, War and Death...

Who, thankfully, also had those two CATS...

Love, Beauty, Sorcery, War and Death all into one Doll...

of the Goddess Freya!

Another exciting collaboration between the Dollmaker and

who made Freya's two companion Cats:

The Dollmaker found a sturdy wagon the right size

to serve as a Chariot...

and back in the Workshop she devised a way to hitch the Cats to the Chariot...

The lovely Goddess Freya got in and took off for the kitchen...

but ended up at

where she met Gene White, the one who she will now rule.

(Merry Christmas and Good Luck to you, Gene!)

T'was upon the final weekend of faire...

with a wave of ye corporate Wand through the air..

with founts of shoppe numbers and reindeer songs,

and mud and new neon, and blanketed throngs...

...and even though it surely could have gotten even more strange...

But before it did...

far more fun was had than should have been humanly possible...

(calculating in the "Mud Factor")

and the Wee Peeple Doll Shoppe was a busy little place...

Yes, for many weeks, (weekends, really) the Wee Peeple Dolls and their Human Friends

Beware the Jabberwock, my son!

And, as in uffish thought he stood,
The Jabberwock, with eyes of flame,
Came whiffling through the tulgey wood,
And burbled as it came!

thousands of people attended the faire and

with unflagging benevolence the RAIN ensured the Safety of All!

Hoodies were hot this year...

December is the month for

that bushy extremely fast-growing plant with the little pink flowers

the one with the gnarly beer-can-sized root tubers...

well- check this out- the Dollmaker discovered quite by accident that

will harden into the shape of

...which can be used in Doll Construction. Isn't that interesting?

this use for the Four O'clock Plant is not mentioned in Wikipedia.

This December the Dollmaker promenaded Victorian-style

and a motley assortment of mustachioed, butt-bustled,

and often tattooed pedestrians at

But then Tally revealed to the Dollmaker

A whole cedar chest full of her Grandmother's hand sewn

One Crazy Quilt stood out from all the rest:

It was a full-sized Masterpiece in "scrap management"!

Every single piece was irregular-

yet all the odd blocks miraculously fit together in the big picture....

Now, of course while she was in the neighborhood, the Dollmaker gave equal time to

beach-combing on the Texas City Dike!

But those irregular quilt pieces

had already settled down in the back of her mind...

and mostly what she saw after that on the beach were

The backs... the glue stripes

Bricks with Words! What fun!

The Dollmaker wants to build something with them...

Back in Austin... there was the

Yes, the Holiday Season has been quite jolly indeed!

the Dollmaker got to watch in her stocking feet as this good fellow, Comter, created

...a sturdy little thing that pumpkin is, too...

but then, before too long, it was once again the notorious

(The Day after Christmas...)

The Dollmaker was visiting Daughter Shannon in Dallas

going out to dinner, celebrating-

To the poor families whose homes were flattened for the holidays...

and to people everywhere who are flattened by Bad News... has nothing to do with what you believe

and everything to do with

your state of consciousness."

"It was a bombastic evening-

one of those nights where you wake up

from the recurring dream of rehearsal

to realize you're alive in a world

you've created wholly out of imagination." 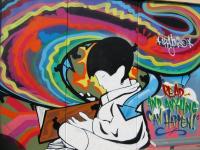 in  October and November  at the The Strange Story of
"Father" Christmas

a book-signing with
Peter S. Beagle

The Fire Part One

The Fire Part Two
The Recovery