What happens when the

Light from a Sunbeam

shines upon a Waterfall....?

"...are irresistibly drawn to falling water

and poised within it's sunlit spray, will absorb it's magnetic force..."

"..until the limit of absorption is reached,

whereupon she releases, in one dazzling flash of light and colour,

the energy with which she is surcharged.."

-observed by Geoffrey Hodson.. in "Fairies at Work and at Play"

"At that magical moment of release

she experiences ecstasy and exaltation

beyond anything possible to mere mortals..."

and therefore, by virtue of "being trapped" in a grossly material body

regrettably unlikely to experience the incandescent Joy of

"...passing in and out of the great rocks at the side of the waterfall

without experiencing any obstruction whatever..."

...the limitations of physicality notwithstanding..

Realm of the Imagination...

By the Sea Shore

So... a note on sporting about with the Water Fairies...

(Being capable of responding ecstatically to sunlit water does not necessarily make them friendlier...)

have been noted to be quite open in their intentions

Song to a Ladybug

and many other benevolent Spirits of Nature

play their part in balancing out the Trickster Impulse...

She who derives potency from stars and moonlight...

Some of these new Painted Rocks

remind the Dollmaker of 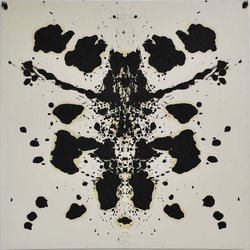 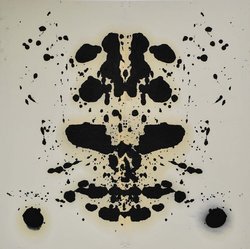 How does the Rorschach Inkblot Test work?

...also not too surprising that ROCKS keep showing up

as the subject of the Dollmaker's paintings...

right ho! ...another message from the forest, sir...

The irrepressible Queen Bonnie and Her Naughty Surprises!

That rascal, her "Overly Familiar" (Cat Puppet - Scottish you know..)

was particularly willful this year..

that the same basic picture be taken each year...

...But this time the "Overly Familiar" KNEW Bonnie's bawdy jokes...

The Dollmaker and friends...

and the Dollmaker did take the opportunity to deliver

a doll, to Kit Davis,

who now has Don White's old Shoppe at Sherwood

and who will provide a most merry Port of Call for

the original Troll Ship (and "host")..

Did the Dollmaker mention that she left the Fairies in charge this year...

A New Royal Empress Tree in the Yard

about 20 feet from the Mother Tree..

Fairy Leadership... what could go wrong...?

Not only are the Flowers more profuse than ever before... but

"somehow" the Lawn-mowing keeps getting sabotaged!

"Wild Areas" have been cleverly substituted for well manicured lawns...

The Imposition of Perfection!

Open up to the Light..

The Dollmaker wishes to take a moment to

recognize and honor the Life of

and raise a glass to the Good Times they shared.

He was a Legend in his own time.