held this year in when the Dollmaker reunited

with her dear old friend (and resident of the Hot Springs Dimensional Vortex),

who has now written a book on Crystals

The Dollmaker immediately traded her a misty Fairy Doll for a copy of the book!

and speaking of Crystals...

no Arkansas Adventure could ever be attempted without including a

Verily, the Dollmaker took off right after the Conference, heading for the Hills and the

The Title: "Crystal Messengers" informs us that these "Stone People"

certain "Medicines" -as they would say on the "Good Red Road"

44 "Energies" are listed in the book.

(44 being a Master number meaning

"A thirst to understand the Mysteries of life")

and to determine the

Messages of her Crystals ...

..This Beauty was the Dollmaker's "Best Find of the Day"..

so, what Message would her best crystal have to share?

assists in recognizing the Divine Within.

"...helpful when you have a problem which you don't seem to be able to solve through usual reasoning patterns,

Channeling Crystals are used for drawing information either from deep inside yourself, or from sources beyond our reasoning.

People often use these types of crystals to gain contact with their 'spirit guide'. "

The Dollmaker discovered that, when using the Channeling Crystal

better results were gained by holding the Crystal between the fingers of BOTH hands,

thus completing a Circuit, with the crystal presumably acting as a semiconductor.

The Transmission Crystal's Message is:

"What you Think and Dream, you can create!"

It will help you (both consciously and unconsciously) to transmit

clear, focused and positive intention into the Universe. 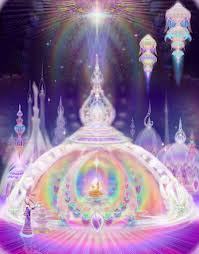 This "cross-crystal" or "cluster" or "Mother-and-Child" formation

is all about Nurturing Relationships.

Observe how one crystal seems to be holding another one.

The Door Crystal is identified by a small facet in the shape of a parallelogram...

...which is, of course, A "Doorway" or "Portal" to spiritual realms!

...used in spiritual healing to make it easier for the Universal Life Force to move

from the spirit world to the physical one to aid in a healing process. Ms. Julie encourages everyone to

feel free to call upon the Crystal Beings for Guidance

( remember to rely heavily on your own intuitive sense about how to use crystals ... sooner or later you must find your own way..)

a little more about

The Dollmaker has also written two other articles about Quartz Crystals:

This is how the Dollmaker works with the Crystal Beings...

She makes Stands for the Crystals

so that they are not just lying flat on their sides...

and she also sometimes places them in the hands of Dolls who want them...

The daffodil-filled Journey to Arkansas

also included the perk of stopping halfway and visiting with

the Dollmaker's Daughter Shannon and

her wild and crazy Roommates...

Roommate Stephanie even made the Dollmaker her own set of Cat Ears!!!