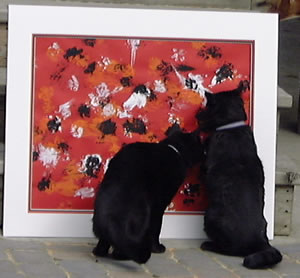 No! Not cats painting!

Hey folks! This is the

to the Wee Peeple Newsletter!

Published every month for the last ten years!

Check out all the newsletters from the past:

ONE lone Poppy came up this year - the STAR of the Garden! "Pierrot with Bauble" and "Phil M.Up" (a hobo Clown)

astounded the Dollmaker with

A Surprise Visit from an old Friend!

The Nametag was missing- and Jay wanted to know... Who IS this guy?

The Dollmaker recognized this fellow immediately as one of her all-time favorite dolls!

..and lo and behold! She FOUND HIM in an old photograph!

very few digital pictures had been remastered from an old photo album... He was on the Page devoted to

AND definitely a Pimp there in the lower right hand corner...

maybe he was just a Mechanic! LOL

Be that as it may, the Dollmaker was quite pleased to see the old "Tough Guy" again!

Thanks, Jay, for sending him "in person"!

He is having a great visit! He met his "Grandmothers" who took him to a "Parade"...

Yes, the What's Up PussyHat Dolls are Still Marching! ...with some very vital Ladies!

The Hill Country is so very SCENIC!  John R. escaped Houston and joined the Dollmaker for

ah well... the Dollmaker contented herself with photographing juxtapositions...

the Roundness of Stones

The Dollmaker has been studying her Art Program!

Here's a Collage of 16 Image Effects in Corel Photo-Paint:

While this is only a fraction of what the program can do,

it's good to begin a Visual Reference and the Photo Collage itself is interesting.

it's almost time once again for

oh yes. this next one is flippin the Dollmaker out!

What is that man in the bathing suit doing?

(at least we THINK that is a bathing suit)

Making pancakes at the

PANCAKES AND BOOZE?   YOU CAN'T HAVE BOTH!

it works for some people, but anyway folks, this is actually a pretty cool

And the Dollmaker is going to be there with the Wee Peeple Dolls!

ah, sweet purple in the aire... at ye olde

As the dollmaker noticed... Conveniently located just across from the PUB!

...That rascally maid- the Bartendress- had the purple gang woozy with free samples!

Reminiscent that concentration and focus were necessary to apply oneself to the challenge of taste-testing...

perhaps called- "Bee-Stings"... (Stinger Dingers? Hive of Bee?  Something like that...)

About that time Becky fell in love with a log;

the Dollmaker was seen surreptitiously cavorting with Known scoundrels;

A Pussyhat Doll, of all things, complete with Grumpy Cat signage

attempted to parade and had to be restrained by a fair maiden;

John got put in jail;

the Dollmaker somehow got into a bodice;

A rollicking purplish bee-stingin good time was had by all....

poor Becky though... she had to leave behind the log she loved... so sad!