Strange Trees have been growing in the Wee Peeple Doll Garden

This year he whispered/emailed: I need a Wee Tree. A Tree Peeple Doll!

But what happened was:

The Treeless Dollmaker embarked upon a RE-FORESTATION PROJECT!

Doll Buying and Debauchery! ...especially on...

(click on this link to read the Lewd and Lascivious Truth!)

Friends of the Wee Peeple Dolls came to the Faire

And The Texas Renaissance Festival broke all previous Attendance Records!

On Highland Fling Weekend, strangely enough! Over 42,000 people showed up that Saturday!

Then, on "Green Friday"

(owner of the Texas Renaissance Festival)

came by the Doll Shoppe and

And lots of Smokey Dolls

chose Special Humans to be a part of their Legend.

(Only 29 Smokey Dolls were left at the end of the festival!)

The Dollmaker rebuilds her life!

Uh-OH! What's this? Replenishing with Outrageous...

To build Fire Dragons from the Ashes

Yes! The collecting and sorting has begun!

so...Dollmaking goes on Once Again in

elsewhere on the property...

As we study the artistic composition: "Sunrise over Steaming Metal"

we become distracted by the activity of a small bluish-greenish light...

when she noticed that the Wreckage was Steaming.

Hmmm. Really? Weird. And cool-looking. So she ran back for her camera.

She took pictures of the Steaming Mists.

The Dollmaker certainly smiles knowingly at the concept of the Phoenix, but, really...

(or purple, blue, and green according to some legends).

near the end of which it builds itself a nest of twigs that then ignites;

both nest and bird burn fiercely and are reduced to ashes,

from which a new, young phoenix or phoenix egg arises, reborn anew to live again.

The new phoenix is destined to live as long as its old self.

In some stories, the new phoenix embalms the ashes of its old self in an egg made of myrrh

and deposits it in the Egyptian city of Heliopolis (literally "sun-city" in Greek).

It is said that the bird's cry is that of a beautiful song.

The Phoenix's ability to be reborn from its own ashes implies that it is immortal,

though in some stories the new Phoenix is merely the offspring of the older one.

In very few stories they are able to change into people. 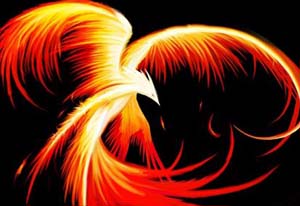 And Thank you Shandi, for the beautiful painting!

Sarah Grant and the Dollmaker at the Wee Peeple Doll Shoppe

I wanted to send you an email right away and

After being so inspired by the Healer Woman I got from you in 2004,

here is a picture of one of the dolls I made out of super sculpey.

I made this doll for my mother-in-law for Christmas 2005:

I have lots of dolls, but these are my favorites.

Thank you so much for the beautiful and inspiring work you’ve shared with me....

...to which the Dollmaker replies...

Thank you Sarah, for sharing your beautiful creation with us!

Making a Doll that comes from the Heart

is exactly how the Dollmaker got started in this Doll Construction business!

and she firmly believes that...

Everyone should make at least one Doll in their lives!

She could never make just one Doll! No way!